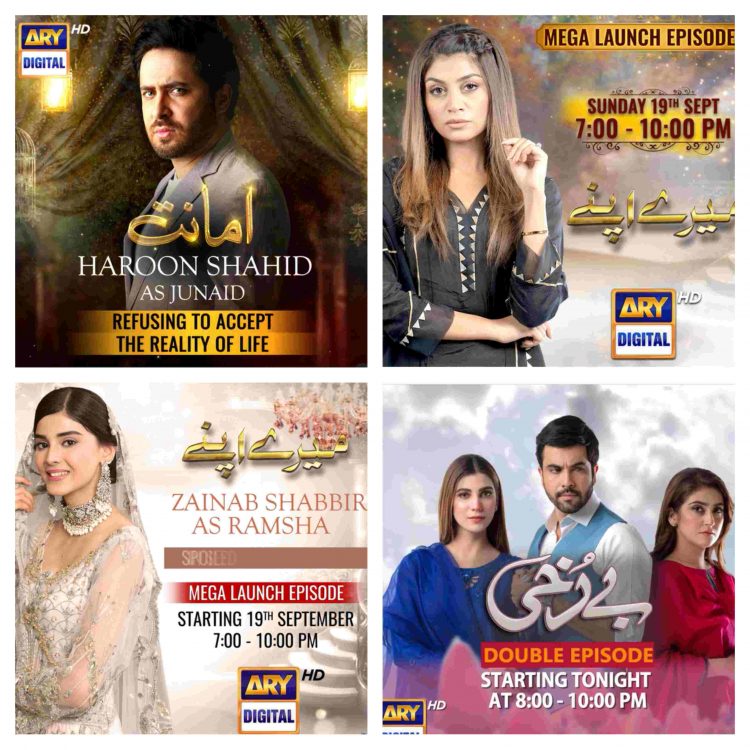 With the start of a new season approaching, ARY Digital will introduce several new star-studded dramas to keep its viewers entertained. All of these shows are also expected to contribute to ARY Digital’s continued growth.

Imran Abbas, Urwa Hocane, Saboor Aly, and Haroon Shahid feature in the title characters of this drama, which promises to be another wonderful, powerful storey full of emotions.
According to reports, Saboor will appear in the upcoming drama in a never-before-seen role.

Samina Ejaz has created another another engaging and intriguing drama for Amar Khan to star in.
Muneeb Butt, Mohsin Abbas, Maryam Noor, Samina Ahmed, Mehmood Aslam, and Rubina Ashraf are among the rest of the cast. Baddua is an iDreams production for ARY Digital, produced by Abdullah Seja.

The drama will launch on Sunday, September 19th, from 7:00 to 10:00 p.m. with a Mega Launch Episode. The upcoming play Mere Apne is based on the pervasive societal issue of ‘Watta Satta’ (Bride Exchange).

Hajra Yamin, Zainab Shabbir, Usama Khan, Ali Abbas, and Zoya Nasir are among the cast members. And based on the preview, the drama appears to be a fascinating plot that promises to be an exciting ride.

Berukhi, the new drama serial, will premiere on ARY Digital on September 15th in a double episode from 8:00 to 10:00 PM.

Mein Hari Piya is a love triangle with a twist, directed by Syed Irshad Ali Arshi and written by Qaisra Hayat.