Dur e Fishan Saleem is one of the industry’s most promising newcomers. She is a stunning woman with a sharp mind. She has already begun to receive applause from the audience, who are enamored with her talent and acting prowess.

Last night on the Ramazan show, Dur e Fishan and Junaid Khan were the guests, with Dur e Fishan appearing for the teaser launch of her upcoming drama Kaisi Teri Khudgarzi.

Dur e Fishan wore a white and black ensemble that she matched with back heels and open hair, and her makeup was flawless. Elan designed her gown, which cost a whopping 82 thousand rupees. Her new drama, in which he stars alongside Danish Taimoor, will be released soon. 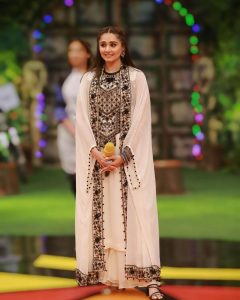