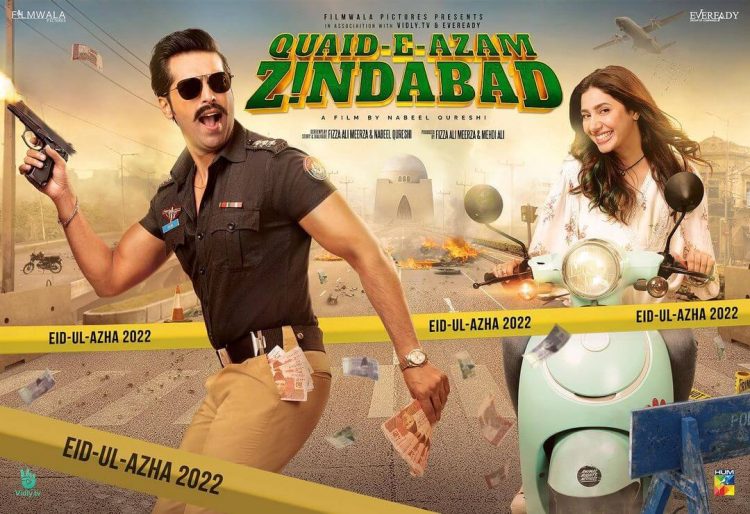 As is well known, the devastating Covid 19 pandemic epidemic caused a complete shutdown of the film industries worldwide. Due to pending and unreleased films, businesses were essentially suffering significant losses. Similarly, from 2019 to 2021, no movies were released in Pakistan. Now that life has returned to normal, successful movies have been successfully distributed in theatres by filmmakers all around the world. Eid ul Adha 2022 also saw the release of numerous Pakistani films.

The upcoming action-comedy Quaid-e-Azam Zindabad, which is being produced by Fizza Ali Meerza, tells the tale of an infamous cop, who is played by Mustafa. The teaser suggests a bad cop-turned-good plot with Mahira Khan portraying a stunning heroine who is directing the hero in the right direction.

The movie, which was shot by Nabeel Qureshi, was once slated for release in 2021. The Covid-19 outbreak, however, caused a delay in the movie’s premiere.

The movie, which is expected to be released this Eid-ul-Azha and is written by Khalilur Rehman Qamar (Punjab Nahi Jaungi), has fans hoping for a healthy serving of drama, romance, and action.

The primary characters in the horror-comedy Lafangey are Sami Khan and Nazish Khan. The story centres on four friends who decide to reside in a haunted mansion and battle the supernatural creatures inside. In the movie, actors like Mani, Saleem Miraj, and Mubeen Gabol play Sami’s buddies.