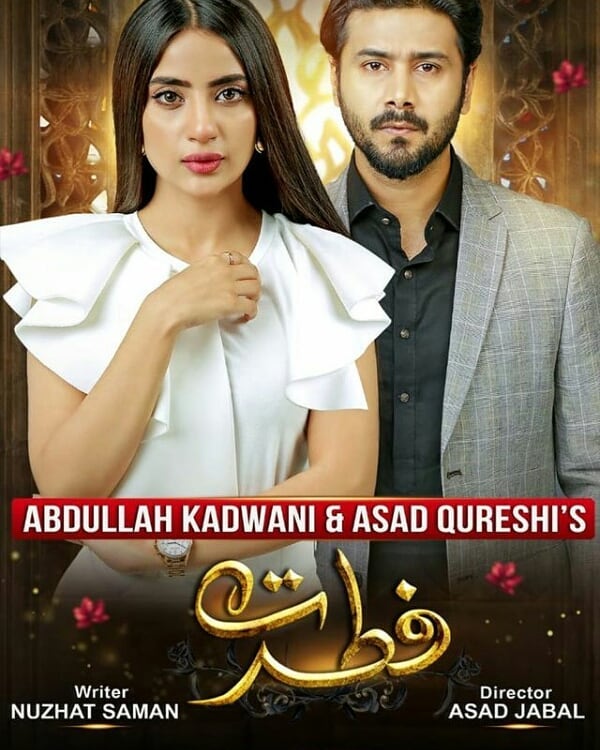 Geo TV’s Pakistani Drama Fitrat is a fascinating drama series. Fitrat drama is based on a compelling plot with numerous twists and turns. This Pakistani drama serial features a number of bold moments that are uncommon in Pakistani dramas. We have all the cast, story, and OST information for the Pakistani drama right here.

In this drama, Saboor Aly plays the part of Faria, a brave girl. Saboor is a talented actress who has been in a number of well-known Pakistani series. Her ability to act well demonstrates that it is in her blood.

Ali Abbas plays Shahbaz. Ali Abbas is one of Pakistan’s most talented actors. He is the son of Mustafa Abbas, a renowned Pakistani actor, and Saba Hameed, an actress. He has demonstrated his acting abilities in a variety of roles.

Maliha (Shahbaz’s wife) is played by Adla Khan in this drama. Adla Khan is a Pakistani actress with a lot of potentials. She has acted in a number of Pakistani shows as a supporting character.

Arbaz is played by Mirza Zain Baig in the Fitrat drama series. Zain is a Pakistani actor who is both attractive and talented. His admirers adored his drama series Malaal-e-Yar, in which he starred alongside Azekah Daniel.

Nadra (Faria’s Mother) is played by Ayesha Gul. In this drama, she is taking a risky role. She has one son and two daughters, and she secretly marries his cousin. Ayesha is a well-known Pakistani model and actress.

Zubab Rana plays the part of Rafiya, a plain girl. Zubab Rana is a model and actress from Pakistan. She’s also appeared in a number of dramas. However, this is her first leading part in a major drama.

Hairs (Faria and Rafiya’s brother) is played by Raeed Muhammad Alam in the drama Fitrat. Raeed is a fantastic actor. In Pakistani dramas, he is frequently cast in a bad role. However, he is portraying a completely different character in this show.

Maryam Nafees portrays the younger sister of Shahbaz and Arbaz. Maryam Nafees is a Pakistani actress with a lot of potentials. She has acted in many drama series as a supporting character.

Faria, whose evilness knew no bounds, was at the center of the plot. She went to great lengths to remove all traces of poverty from her life. She first married her boss Shehbaz (Ali Abbas), but she didn’t change her ways after that and continued to have affairs with wealthy men to satisfy her hunger for money.