In addition to her husband Mani, Hira Mani began her career as a host. He supported her career along the way and got her into show business. This is the reason Hira constantly compliments Mani when she discusses her work and accomplishments in any interview. Since then, she has hosted morning shows and entered the acting industry. Many of Hira’s works have been successful, such as Do Bol, Mere Paas Tum Ho, Ye Na Thi Hamari Qismat, and Kashf. Her acting skills and upbeat personality are well-liked.

Hira has recently ventured into live performances and has been performing at concerts all over the world. She performed in the Wembley Arena on Independence Day among numerous other Pakistani celebrities. She entertained the gathering by singing and dancing. Hira is currently spending her free time in the UK with her husband Mani, and as always, she is wearing edgy and eccentric clothing. Here are some images of Hira looking fabulously stylish while on vacation in the UK: 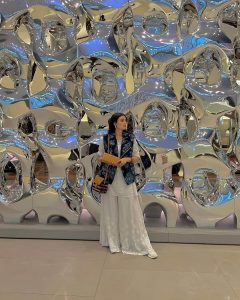 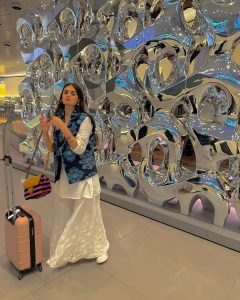