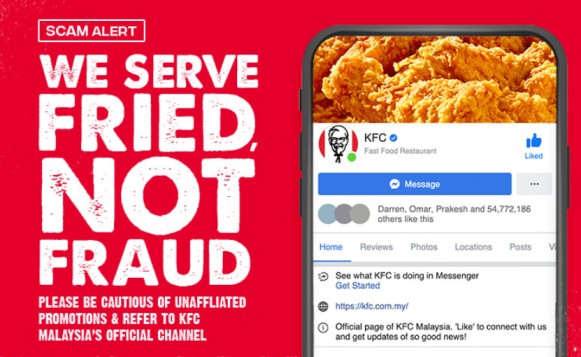 On Women’s Day, a few scams are seen creating a flair on numerous social media handles, especially on WhatsApp. In the scam, people received a message that shows free offers of a free KFC Family Bucket meal. It wanted the users to share the same request with a certain number of their WhatsApp contact until the bar is filled.

After opening the link, users are directed to a webpage. The webpage has 9 different boxes that supposedly have the “free meal”. The users would typically fail in the first two tries, and the free meal would be received on the third try. After this, the webpage congratulates the user and asks him or her to further share the offer with any of the WhatsApp contacts. He or She has to share the same offer up to 10 times until the progress bar is filled.

A “continue” button will be highlighted after the successful filling of the progress bar. Upon pressing the button, the user will be directed to a dead-end. It will have nothing but hidden malware. The scam is mainly designed for smartphones. It’s because smartphones usually don’t have any antimalware application. The malware will identify it as ‘Script: SNH-gen [Trj].

KFC Malaysia said that this scam is designed to steal the personal information of users. The company has warned everyone not even to open such links. The KFC Family Deal scam has reached numerous countries and has affected various devices.

All in all, if people are provided such offers, they need to be careful.