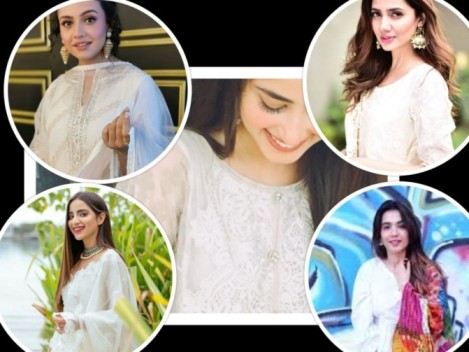 Sajal Aly’s is a name that doesn’t need any introduction. She is not only an incredible actress, a fabulous performer but a phenomenal human being. Some love her for her innocent looks, and others are fond of her big sparkling eyes. But above all, it’s the actress’s incredible acting and performing skills that make her stand out, among others.

One pretty common thing and people expect it to, is rivalry among actresses. It’s a general opinion and generally accepted norm that co-stars, especially female co-stars, have strong feelings of jealousy and hatred for one another.

The strong and devoted ladies of our industry have played a significant role in bursting out all those bubbles. Whether it be Zara-Sajal’s incredible bond or Minal-Saboor’s unbreakable bond, we can witness some outstanding friendship bonds within our industry.

The actress looked gorgeous in the picture as usual. But it’s not her picture that grabbed everyone’s attention this time. People took notice of the comments on the post. Mahira Khan left a heart-touching comment on Sajal Aly’s post. She wrote,” Oh my God you look so much like Saboor 😍😍 so pretty!” On this, the Gul-e-Rana star replied, “@mahirahkhan janaaaaaab ❤️💋💋💋” She also added, “@mahirahkhan Saboor yeh sun kar behad khush hogi 😜😜😜 @sabooraly” Saboor Aly took notice of it and replied humorously, “@mahirahkhan Wohi main kahoon aaj itni pyari Kesay lag rahi ha 😜🤣🙊” Sajal Aly’s fans loved this exchange of comments between the actresses.

Zara Noor Abbas and Mansha Pasha also showered their love on Sajal Aly’s picture. We enjoyed this conversation and exchange of compliments between these talented and stunning actresses.