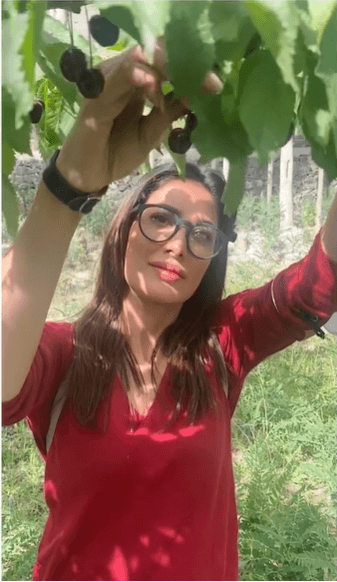 The stunning Mehwish Hayat has been spotted in the picturesque hill station of Skardu, and she appears to be flaunting her romantic trip to the mountains on social media.
While on vacation, the Load Wedding actress made sure to share some breathtaking Skardu photographs of herself and the epitome of nature’s magnificence.
The 33-year-old just shared a cute video in which she is occupied cherry-picking, delighting her large fan base.

She said  “Cherry picking in Skardu. My first time eating cherries straight off the tree.. God they were fresh and yummy. I clearly got carried away and didn’t know when to stop..  I think I ended up finishing the whole tree… LOL but hey I can’t be blamed it was these cherries that were out of this world!”

Hayat’s video of cherry harvesting at a farm in Skardu has gone viral on social media.
Hayat is one of Pakistan’s most bankable celebrities. For her achievements to the entertainment business, the Dillagi actress received Pakistan’s highest honor, the Tamgha-e-Imtiaz.
Hayat is unapologetic about her work and fashion choices, thanks to her great looks and pleasant character.