Pakistan beat Bangladesh in the first Test match in Chittagong thanks to a stunning opening partnership between Abid Ali and Abdullah Shafique.

With eight wickets in hand, Pakistan chased down the 202-run goal. Abid Ali scored 91 runs, while Abdullah Shafique added 73. This was only the second occasion in Pakistan’s 440-match Test history that an opening duo had two century stands in the same match. Here is the match summary of 1st test match. 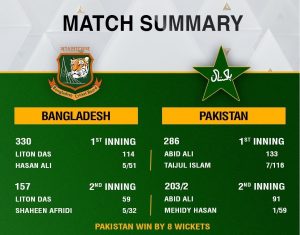 In Lahore in 2003, Imran Farhat and Taufiq Umer did it for the first time against South Africa, and Pakistan won by eight wickets.

After debutant Yasir Ali had to leave the field after a searing bouncer by Shaheen hit the flesh of his helmet, Liton made a battling 59 off 89 to keep Bangladesh’s innings alive. Nurul Hasan Sohan was named as Yasir’s substitute due to his concussion.