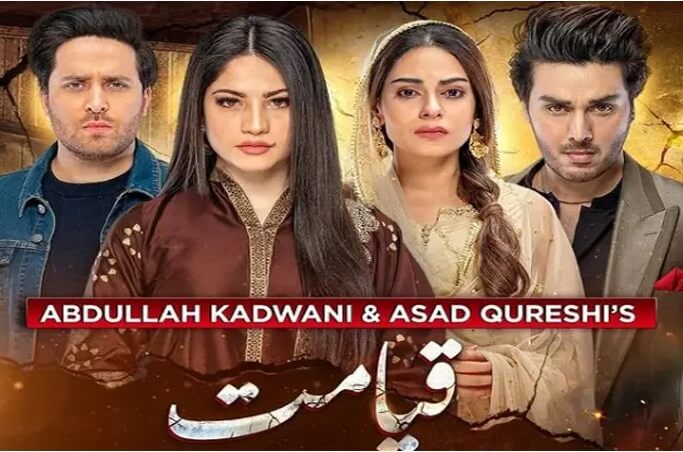 Qayamat was a popular Geo television drama that was produced under the auspices of 7th Sky Entertainment. The drama was directed by Ali Faizan and written by Sarwat Nazeer. Because to Ahsan Khan’s outstanding performance, the drama Qayamat gained a lot of popularity among the public. Due to the flow of the tale and superb acting, the play also remained in the debates. Rashid, Ahsan’s character, became extremely popular. Fans praised his writing style and conversations.

Ahsan Khan is a famous actor who has worked as an actor, host, producer, and performer in the entertainment sector. He is a versatile actor who has appeared in films such as Nikah, Billi, Ghar Kab Aao Gay, Sultanat, Ishq Khuda, and Dil Mera Dharkan Teri, among others.

Neelum Muneer is a stunning actress and model who has been in a number of drama series, including Jal Pari, Meri Behen Maya, Ashk, Meri Subh Ka Sitara, Kahin Deep Jalay, and others. Her work as a model for many brands and designers has continued to impress the public.

Haroon Shahid is a gifted singer and actor who has made a name for himself in the entertainment industry. He co-starred in the blockbuster film Verna with Mahira Khan and also acted in the drama series Tamanna. He is a family man who makes time from his hectic schedule to spend with his wife and children.

Amar Khan is a wonderful actress who rose to fame and recognition thanks to her roles in films such as Dil-e-Gumshuda, Choti Choti Batain Ghughi, and others. She has a large fan base thanks to her incredible sense of style and pleasant demeanour.

Saba Faisal is a well-known actress in the entertainment world who has had a long career. Her amazing acting skills have wowed audiences in drama serials such as Pyaray Afzal, Rangreza, Baaghi, Pagli, Soteli, Humsafar, and many others.

The drama story of Qayamat is filled of emotions, romance, and suspense. Neelam Muneer has teamed up with Ahsan, who is both gorgeous and talented, for the first time. Their admirers are anticipating the arrival of their on-screen pair. Ahsan is portraying a villain in this film. The wife of Ahsan is played by Amar Khan.

Ahsan Khan is well-known for his attractive demeanor and exceptional acting abilities. He began his entertainment career in 1998 and has remained at the top of the Pakistani showbiz industry throughout his long career. Haroon Shahid is also a member of the drama Qayamat, and his superb performance will add to the excitement of the series.