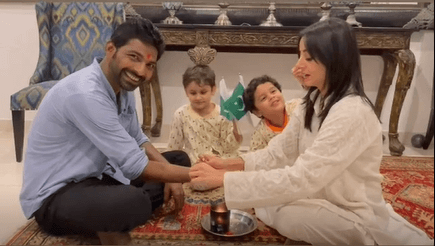 Sarwat Gillani is a remarkable actress who has been in a number of notable dramas, telefilms, and films. For her portrayal in Jawani Phir Nahi Ani, she was nominated for a Lux Style Award for best supporting actress. Sarwat is married to the multi-talented actor Fahad Mirza, who is also a plastic surgeon by trade. The couple has two gorgeous youngsters together.

Sarwat Gillani’s cook Ghanaish just celebrated Raksha Bandhan. She shared a cute video of herself completing the ceremony with her cook. She was accompanied by her boys, who held the Pakitan flag in their hands.

The majority of Sarwat’s supporters praised her kindest gesture to her chef, who is a member of Pakistan’s Hindu minority, but some chastised her for hiring a Hindu cook. Let’s have a look at her videos.