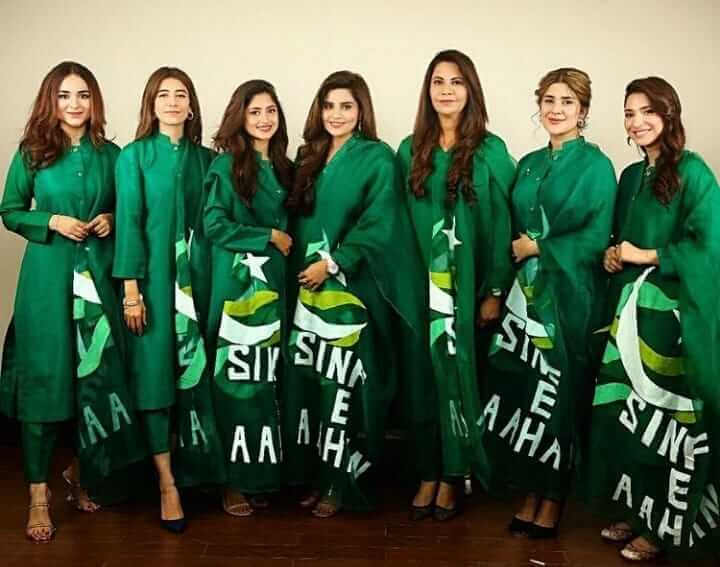 Umera Ahmed’s next drama Sinf-e-Aahan will be directed by her. It’s a female army cadet/officials-based ISPR project. Sajal Aly, Yumna Zaidi, Syra Yousuf, Kubra Khan, Ramsha Khan, Ali Rehman Khan, Asad Siddiqui, Asim Azhar, Shehryar Munawar, and Usman Mukhtar are among the star cast members of the drama series Sinf-e-Aahan. Next level Entertainment, which is owned by Shahzad Nasib and Sana Shahnawaz, and Six Sigma Plus, which is owned by outstanding actor and producer Humayun Saeed and his wife Samina Humayun Saeed, are collaborating on the drama. The drama will be directed by Nadeem Baig and will be broadcast on Ary Digital.

The Sinf-e-Aahan Cast is out now. Take a peek at it below:

Kubra is a stunning, young, and accomplished Pakistani actress and model who began her career in the film industry. Her impressive performance and kind attitude garnered her a lot of love and popularity in a short period of time. She began her career as a fashion model, which she did for a long time. Her stunning beauty and expressiveness aided her in her career as a supermodel. In the film ‘Na Maloom Afraad,’ she made her Lollywood debut in 2014.

Mahjabeen Mastaan is played by Kubra Khan, and she comes from a wealthy family with a tense and acrimonious relationship with her parents.

Sajal Aly is a skilled actress who has been in a number of notable dramas, including Angan, Noor-ul-ain, Gul-e-Rana, Alif, and Yeh Dil Mera. In Dubai, Sajal was also honoured with the DIAFA award. The majority of the performers have acknowledged her acting abilities. Many Pakistani actors adore Sajal Aly’s acting, and now actors from across the border are praising her after viewing her incredible performances.

Rabia Safeer, the sister of an Army officer and a top student in her class, chooses to join the Pakistan Army to prove herself and do something exceptional with her life.

Syra Yousaf is a lovely and versatile Pakistani actress, model, and VJ who has been in show business since 2011 and has captured the hearts of millions of people with her pleasant demeanour and beautiful smile.

Syra Yousaf portrays Arzoo Daniel, a Christian girl who has been in a toxic relationship with her fiance Noraiz for five years.

Yumna Zaidi is one of those actors who has earned a special place in the hearts of her fans as a result of her hard work. Yumna Zaidi has been in scores of dramas and has established herself as a household figure. Yumna Zaidi’s most well-known efforts are “Pyar Kay Sadqay,” in which she gave a powerful performance that wowed the audience. Yumna’s most recent appearance was in the drama series “Dil Na Umeed Toh Nahi.”

Yumna Zaidi plays Shaista Khanzada, a conservative Pashtoon woman from a conservative family. After watching the opening video, it appears that she ran away from home in order to join the Pakistan Army and serve her family and nation.

Ramsha Khan is a wonderful Pakistani actress on the rise. In the drama film Thora Jee Le, she made her acting debut. She has acted in a number of prominent drama serials, including Mah-e-Tamaam, Khud Parast, Kaisa Hai Naseeba, and Ishqiya, for which she has received critical acclaim. Ramsha has appeared in the drama series “Ghisi Pitti Mohabbat” and is presently starring in Ary Digital’s Shehnai.

Pariwesh Jamal, who hails from a tribal area of Balochistan, is played by Ramsha Khan. After overcoming adversity and opposing her tribe’s traditional values, she is able to join the Pakistan army.