These Pakistani celebrities are bringing loungewear back into style 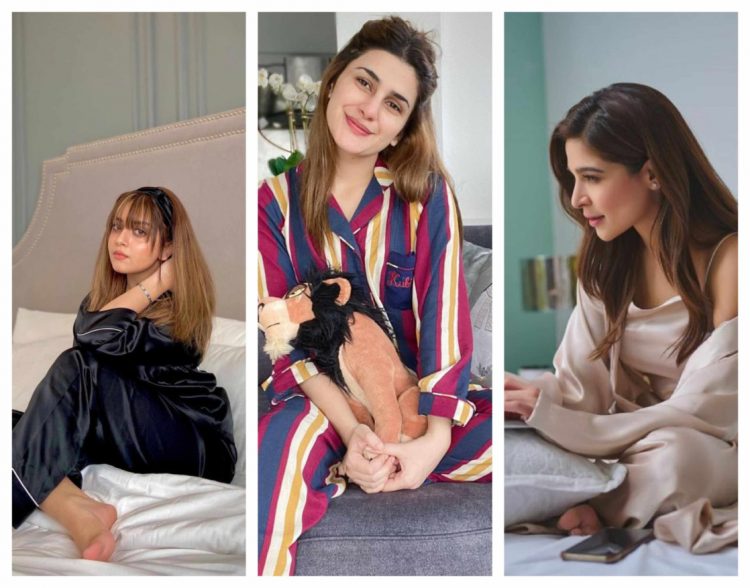 These Pakistani divas look great in their casual loungewear. Kubra Khan, Ayesha Omar, Urwa Hocane, and other well-known showbiz actresses have proven that they can look fantastic in any clothing.
Yes, even ‘bed wear’ is included.

Pakistani celebrities are among the most fashionable on social media. Hania Amir, Kubra Khan, and other actors and models have become fashion inspirations for young girls across the country. It’s no wonder that many fashion labels and well-known designers are turning to these celebrities to promote their current collections. While all of these stunning stars like to ‘dress to please’ onstage and in front of the camera, we’re curious about how they dress when the cameras aren’t rolling.

Loungewear, often known as pajamas (PJs), is a popular choice for ‘chilling at home. Most celebrities avoid showing their followers this appearance for fear of jeopardizing their ‘glamorous’ image. There are a few stunning actresses and models, though, who can make everything appear good. If you don’t believe us, check out how Pakistani starlet Mehwish Hayat wears PJs on social media.

She is one of the few celebrities who can turn loungewear into a trendy style. Take a peek at how some of your favorite Pakistani actresses and models wear loungewear with panache.

Alizeh Shah is a Pakistani actress who works on television. She won the Hum Award for Best Television Sensation for her role as Palwasha in Ishq Tamasha. In Ehd-e-Wafa, Shah played the part of Dua. She has acted in several films, including Hoor Pari, Jo Tu Chahey, and Mera Dil Mera Dushman. as well as Taana Baana. 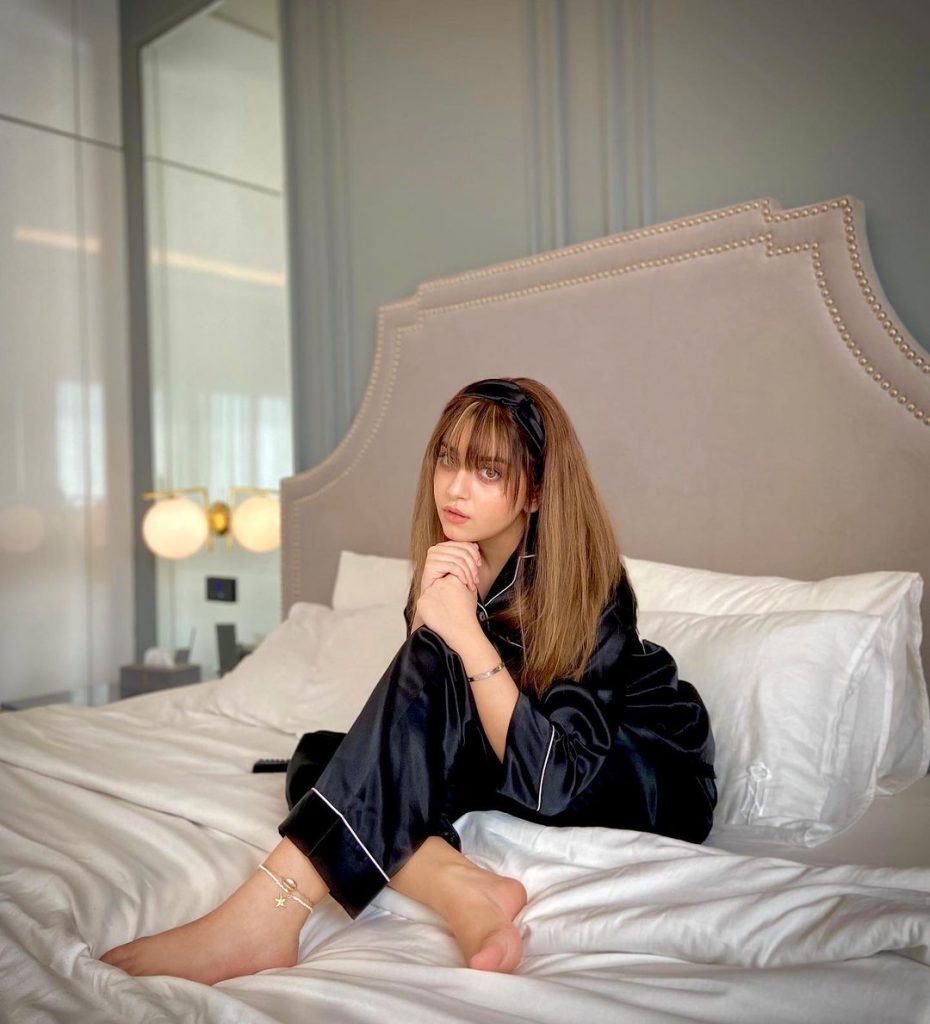 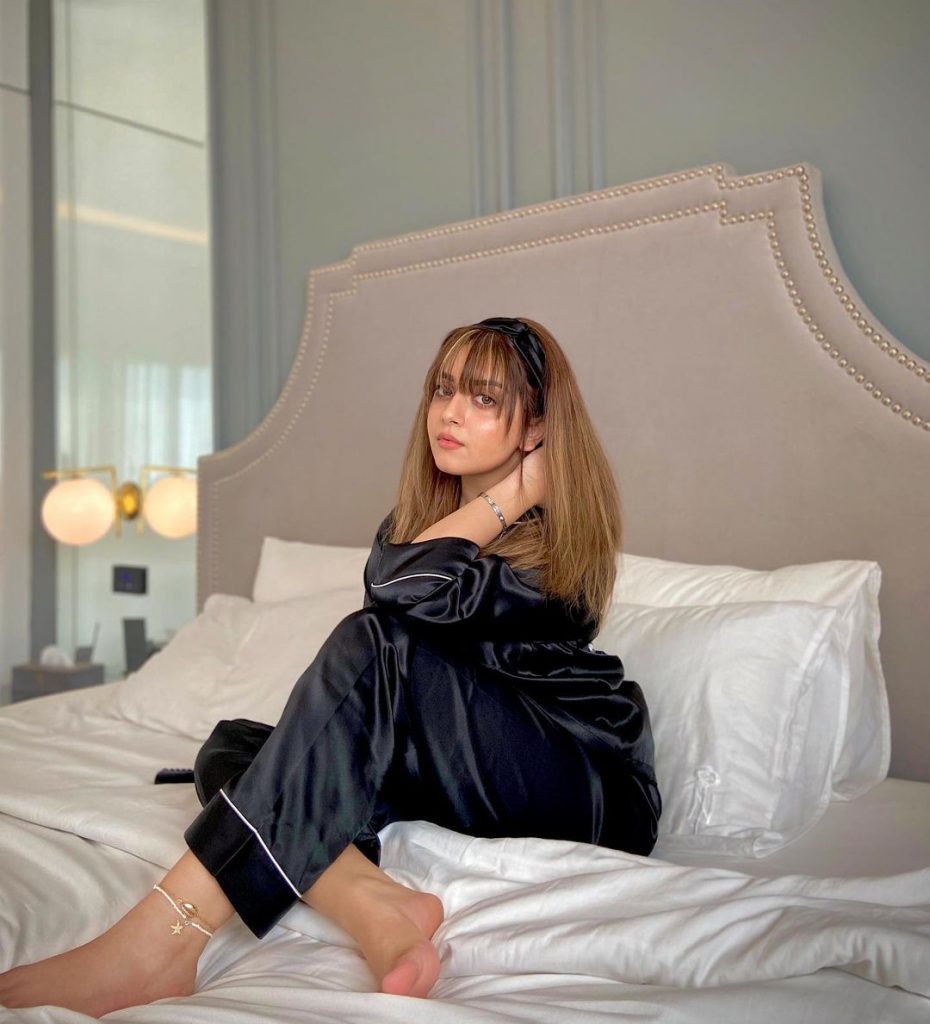 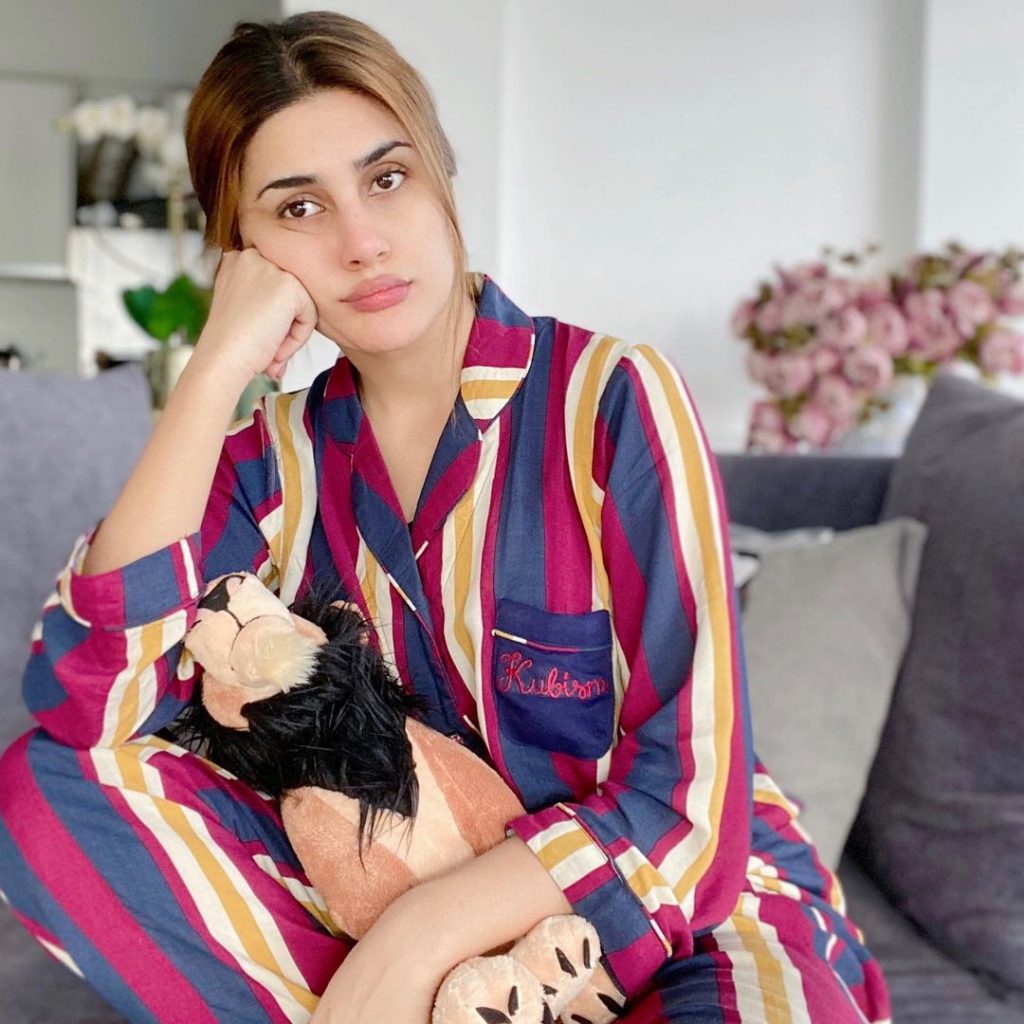 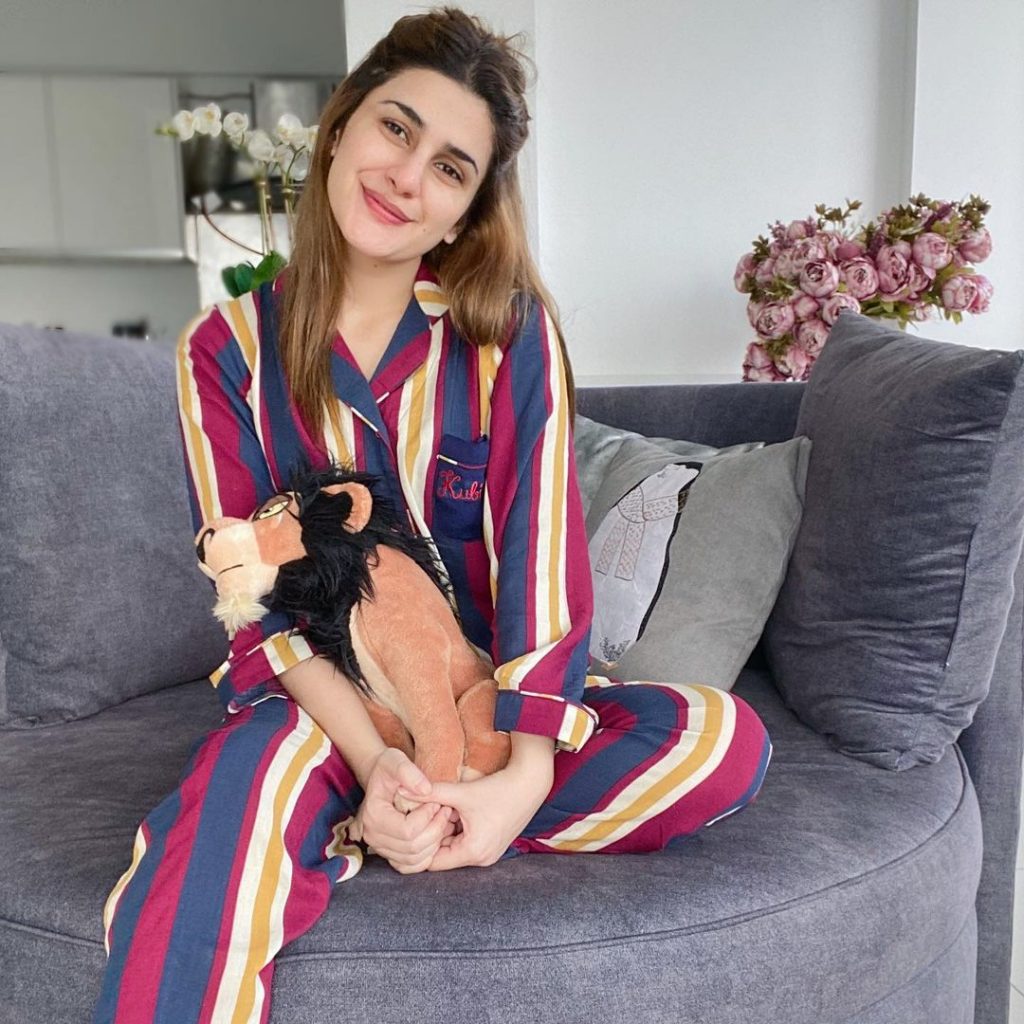 Urwa Tul Wusqua Hussain is a Pakistani media personality, model, and actress who goes by the stage name Urwa Hocane. Urwa Hocane made her film debut in Na Maloom Afraad, a romantic comedy released in 2014. 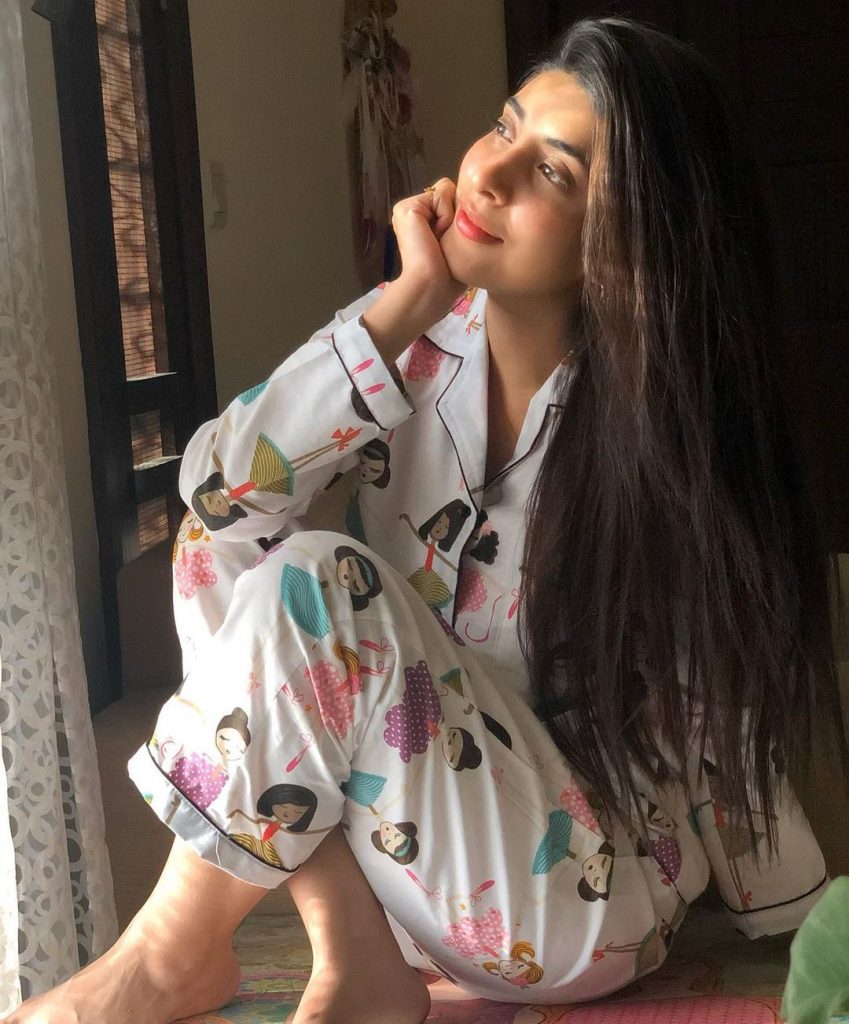 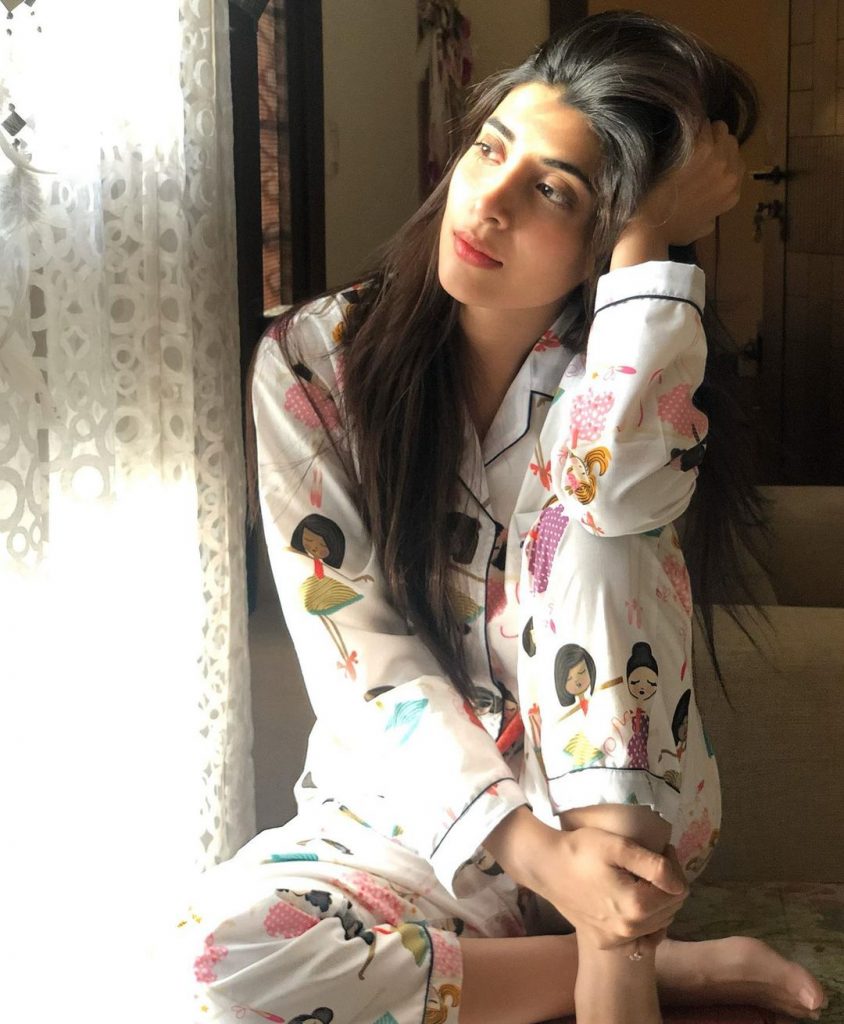 Mawra Hocane, sometimes known as Mawra Hussain (Urdu: ), is a Pakistani model and actress who was born on September 28, 1992. She graduated from the University of London with a law degree, which she completed after returning to school. She worked as a VJ at ARY Musik after performing as a theatrical artist.

Aahista Aahista, Ik Tamanna Lahasil Si, and Nikhar Gaye Gulab Sare are three Pakistani television serial dramas in which Hocane appeared. She made her Hindi cinema debut with Harshvardhan Rane in the Indian romantic flick Sanam Teri Kasam. With Jawani Phir Nahi Ani 2, she made her debut in Pakistani cinema. 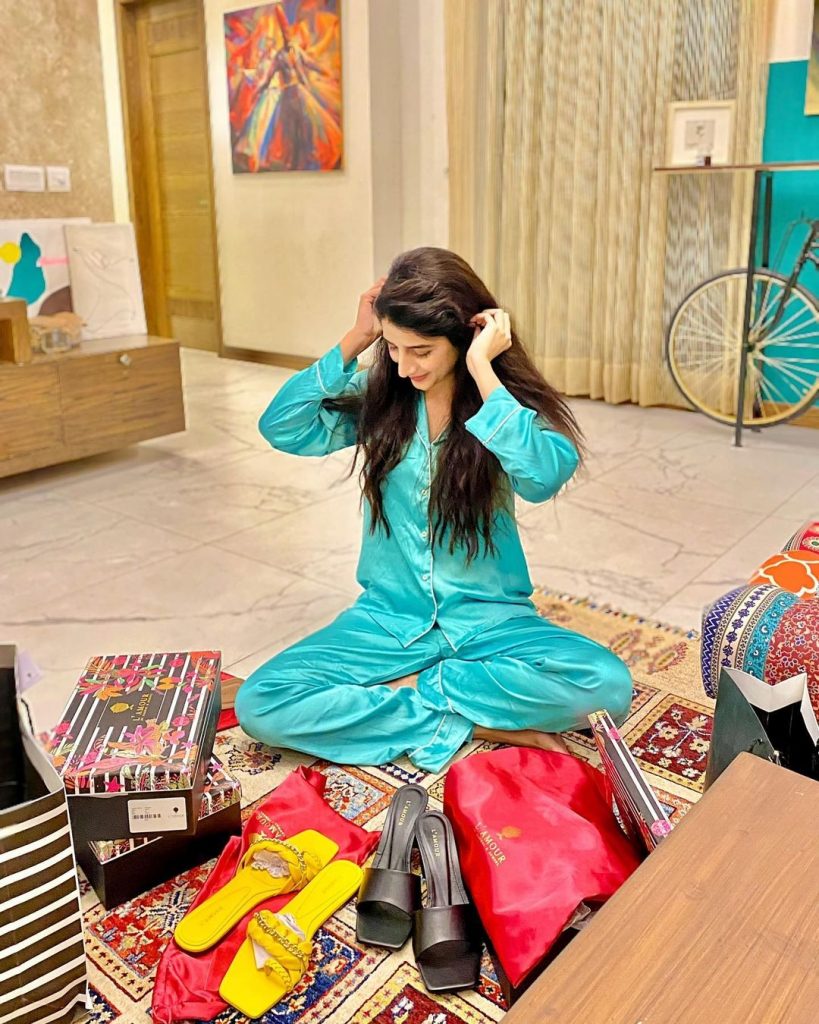 She participated in the Pantene Hum Bridal Couture Week in December 2018. For designer Nilofer Shahid, she modeled golden bridal fashion. Designer HSY’s creation had a show-stopper in her. She narrated and acted in the Hum TV historical drama Aangan. In Daasi, she played Sunehri, and in Sabaat, she played Anaya. Her apparel line, which she co-founded with her sister Urwa Hocane, debuted in June 2019. 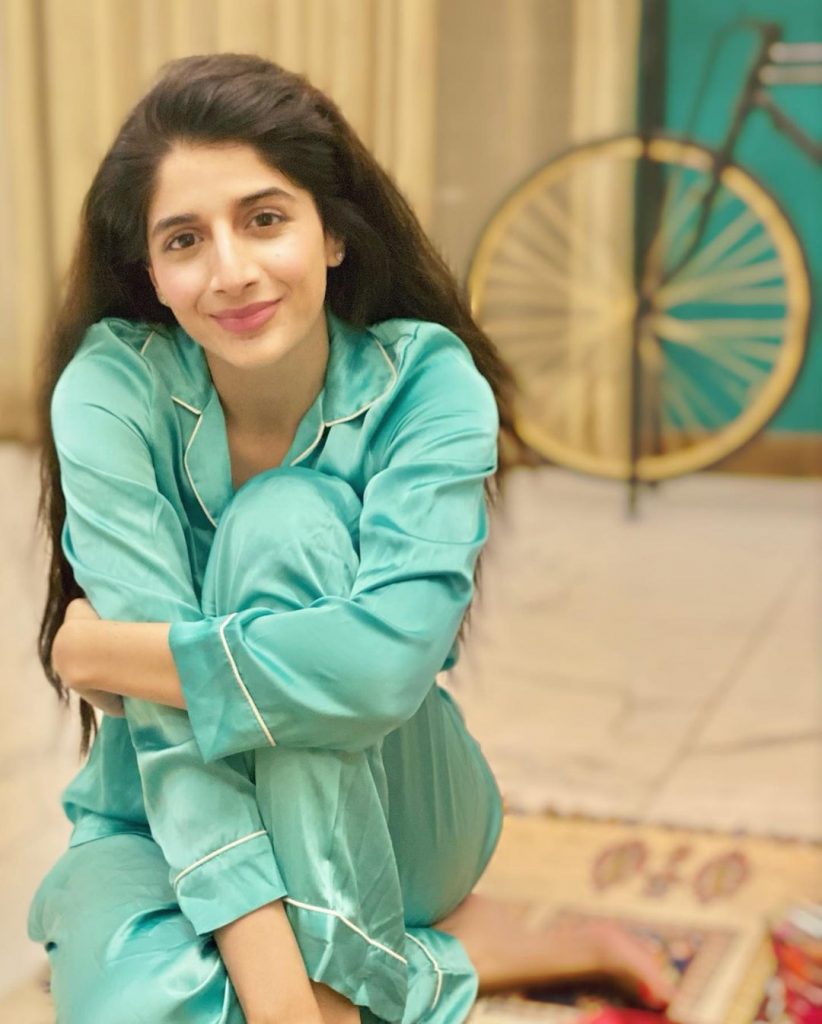 Hania Aamir (Urdu: ) (born February 12, 1997) is a Pakistani actress, model, and singer who has worked in films and television. While at the Foundation for Advancement of Science and Technology, Aamir created several dubsmash videos and shared them on social media, catching the attention of producer Imran Kazmi, who cast her in a supporting role in the blockbuster romantic comedy Janaan (2016), earning her a Lux Style Award nomination for Best Supporting Actress. 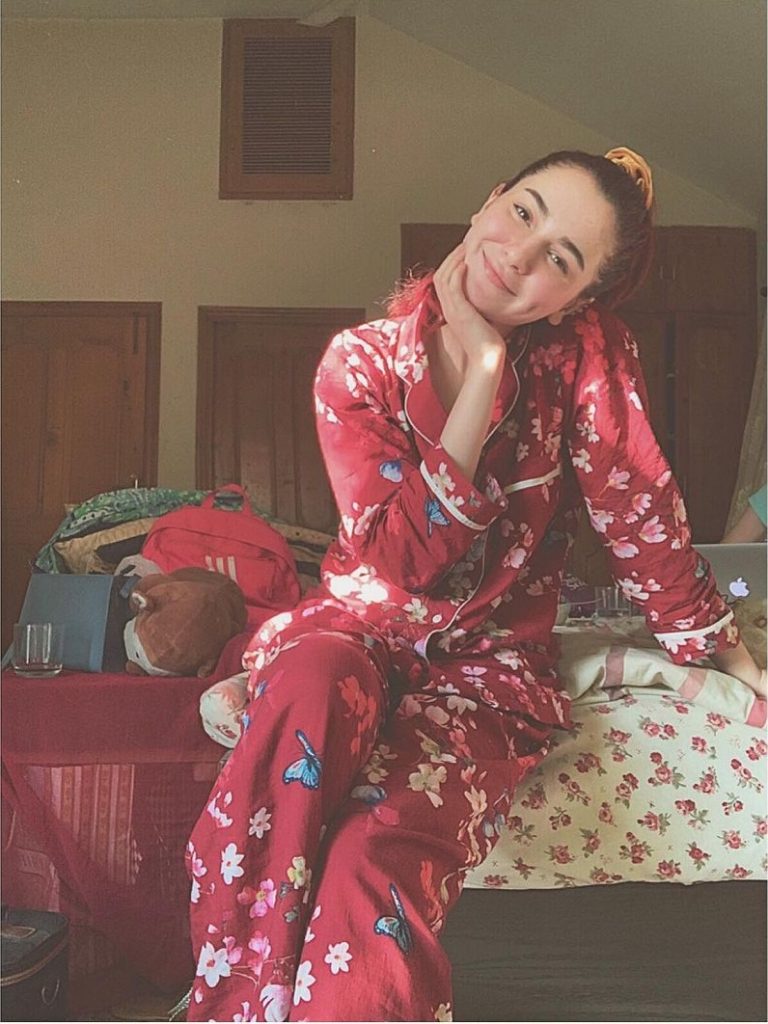 Her subsequent appearance in a Sunsilk commercial made her one of Pakistan’s most sought-after media figures.
In the romantic television series Titli (2017), Aamir played a beauty-obsessed unfaithful wife, while in the melodrama Visaal, he played a girl next door (2018). She went on to star in the action-comedy Na Maloom Afraad 2 (2017) and the aerial combat war picture Parwaaz Hai Junoon (2018), both of which are among the highest-grossing Pakistani films of all time, and received accolades for her work in the 2019 romantic television series Anaa.

Hania Aamir has starred in various television advertisements, including Garnier and Mobilink, in addition to performing in films and television. She performs in theatre productions and concerts. Her most recent project is Ishqiya, in which she stars with Feroze Khan and Ramsha Khan as Rumaisa (also known as Rumi). She was most recently cast as Sanam in HUM TV’s Dil Ruba.

Ayesha Omer is a Pakistani actress and YouTuber who was born on October 12, 1981. She is one of the most well-known and well-paid actors in the country, as well as a fashion icon. The Warsi International Organisation gave her the Tamgha-e-Fakhr-e-Pakistan (Pride of Pakistan) in 2019. 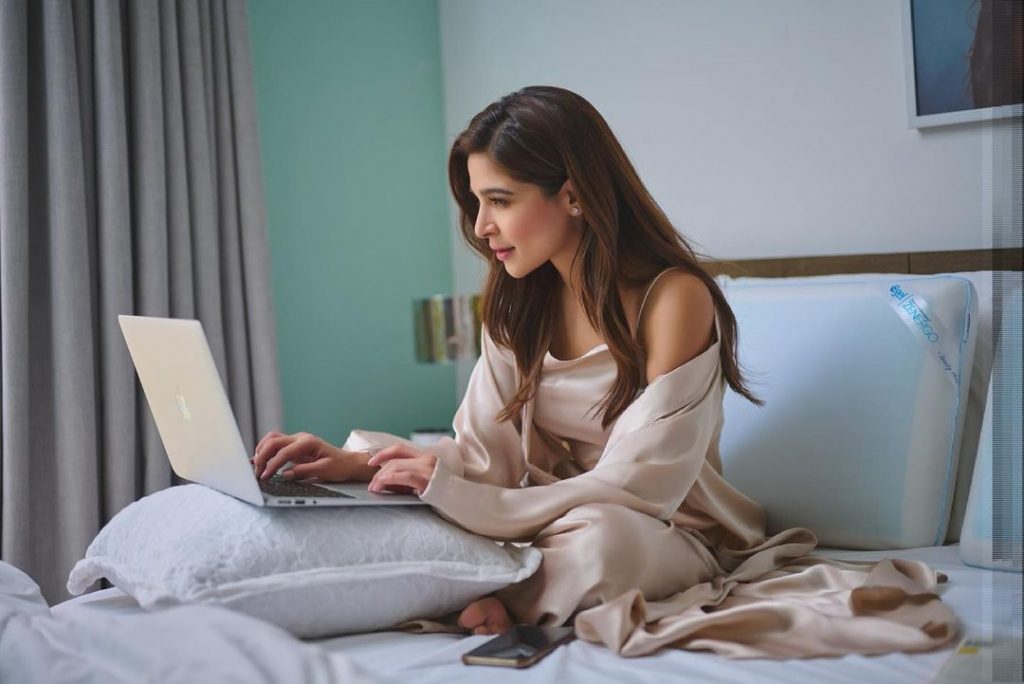 In 2012, she released her first singles, “Chalte Chalte” and “Khamoshi,” which received mixed reviews from critics while being a commercial success in Pakistan. Following that, Omer won the Lux Style Award for Best Album.
In 2015, she made her feature film debut in the romantic comedy Karachi Se Lahore, followed by supporting roles in the war picture Yalghaar (2017) and the drama Kaaf Kangana (2019).

Iqra Aziz Hussain is a Pakistani actress who works on television. She is well recognized for her portrayal as Jiya in Momina Duraid’s Suno Chanda, for which she won the Lux Style Award for Best Television Actress. She is now starring in Khuda Aur Muhabbat 3 as Mahi and Raqeeb Se as Ameera. 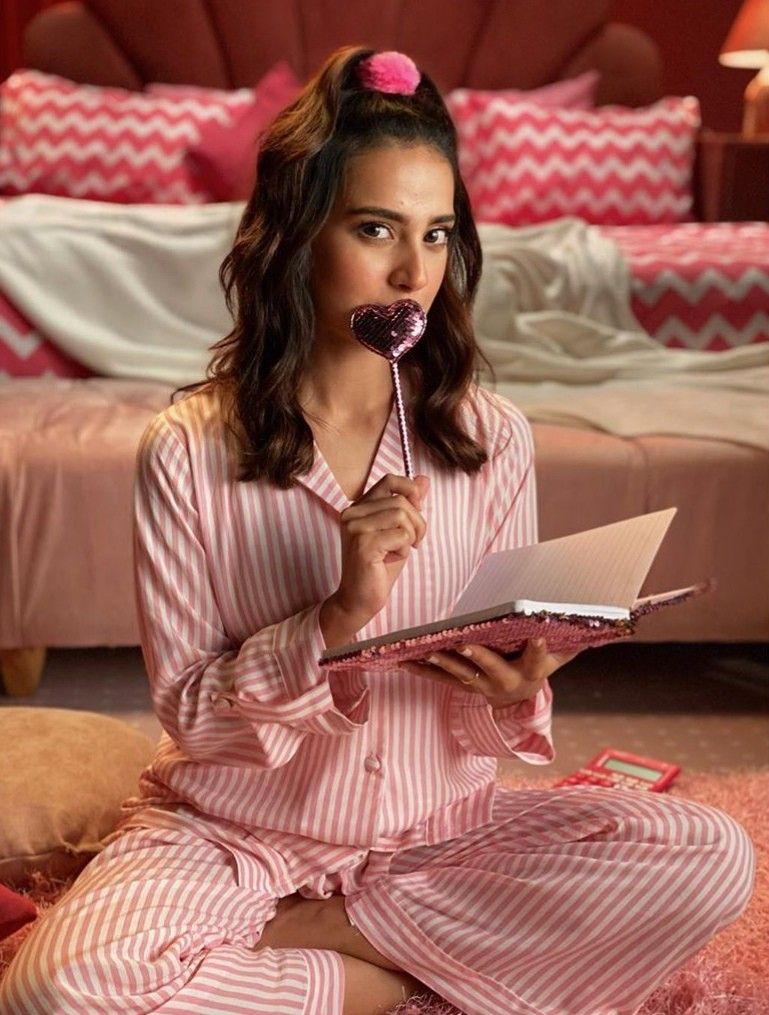 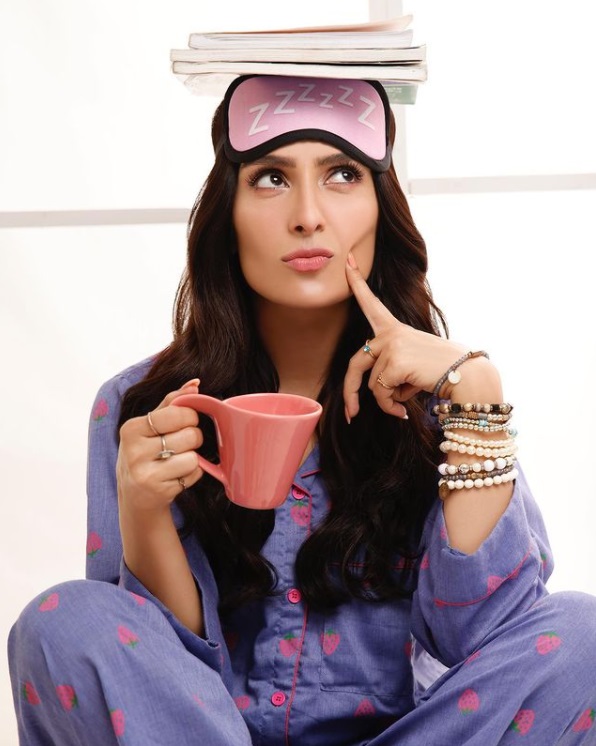 Her portrayal of Mehwish in Mere Paas Tum Ho garners her significant accolades. AyezaKhan has won numerous awards, including the Lux Style Awards, the Hum Awards, and the Pakistan International Screen Awards. 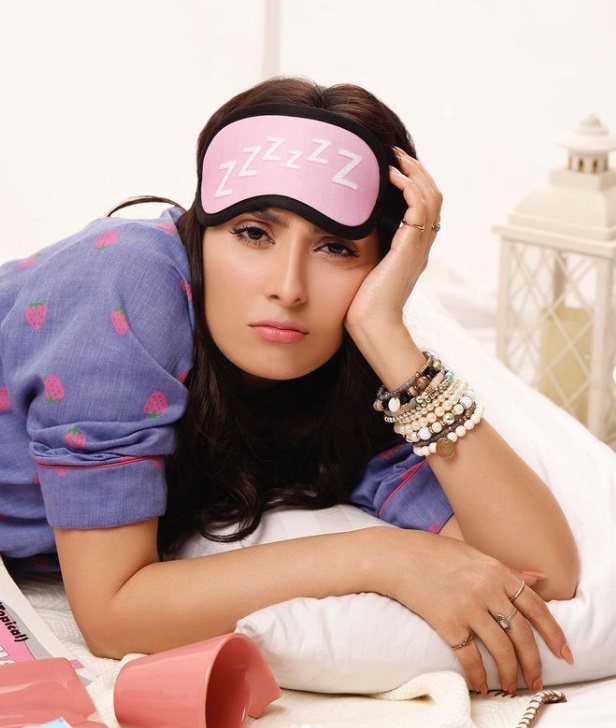